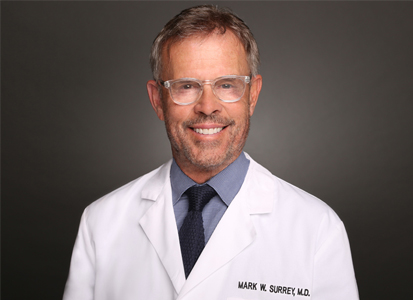 Co-founder and Medical Director of the Southern California Reproductive Center, Dr. Mark Surrey is a leader in the field of fertility and reproductive medicine, including reproductive surgery and in vitro fertilization (IVF).

Dr. Mark Surrey is a reproductive surgeon who is board-certified in obstetrics and gynecology and serves as Clinical Professor in the Department of Obstetrics and Gynecology at the David Geffen School of Medicine at UCLA. He is also Associate Director for Advanced Technologies and the founder of SCRC, which provides IVF services to UCLA and Cedars Sinai Medical Center.

Dr. Surrey has been voted one of the “Top 100 Health Professionals” and listed in “Best Doctors in America,” and his expertise has also been featured nationally and internationally on television shows and magazines, including New York Times, Los Angeles Times, Glamour, Parents, CNN, Fox, CBS, ABC, NBC, among many others.

A prolific researcher, Dr. Surrey has authored numerous publications for leading peer-reviewed journals including Fertility and Sterility and the Journal of Assisted Reproduction and Genetics. An active leader in this field, he was past president of the American Association of Gynecologic Laparoscopists (AAGL) – the largest association of minimally invasive gynecologists in the United States, and the leading organization of its kind worldwide. He has since pursued rigorous training in IVF, preimplantation genetic diagnosis (PGD) pelvic reconstructive surgery, microsurgery, and laparoscopic surgery in Lueven, Belgium as one of the initial investigators of laparoscopic reconstructive surgery. He is also past President of the Pacific Coast Reproductive Society, the premier society of IVF specialists in the Western United States.