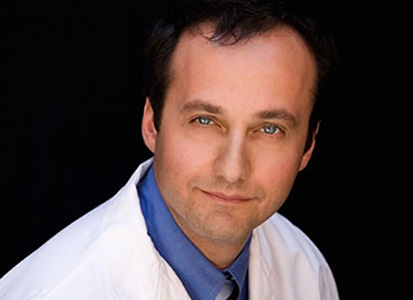 Alexander Rivkin M.D. is a Yale trained facial cosmetic surgeon and UCLA faculty member who focuses exclusively on providing his patients with the latest in non-invasive, non-ablative cosmetic treatments. Dr. Rivkin has made his name in developing non-surgical alternatives to commonly performed invasive cosmetic procedures. As an international authority on non-surgical cosmetic treatments, he divides his time between patient care, clinical research, educating other physicians, media appearances and lecturing at scientific conferences around the world.

Dr. Rivkin understands that no one relishes the thought of “going under the knife,” and believes modern medical technology can provide today’s patients with superior alternatives to invasive, painful surgery that requires a long recovery time. He has dedicated his career to developing these alternatives, creating exceptional cosmetic solutions that his patients can access without the fear, which has long been associated with cosmetic surgery.

Dr. Rivkin was the first physician in the country to offer the Non-Surgical Nose Job, his signature method for non-invasive correction of cosmetic nasal irregularities. He has been featured throughout national and international media on shows such as The TODAY Show, The Tyra Banks Show and EXTRA for the various innovative procedures he has invented.

Dr. Rivkin received his undergraduate degree from Columbia University and his M.D. degree from Yale University School of Medicine. He received his postgraduate residency training in Otolaryngology-Facial Plastic Surgery at the University of California, San Diego. He has authored numerous scientific articles and has been recognized for outstanding research achievements with grants and awards from the National Institutes for Health, the American Academy of Otolaryngology and the American College of Surgeons.

After several years of being an Allergan Clinical Educator, Dr. Rivkin was recently honored with Diamond level status: recognition that he is among the top 1% of Botox providers in the nation.

Giving back to the community is a priority for Dr. Rivkin. He donates his time removing gang tattoos with Homeboy Industries and seeing ENT patients at the Saban Free Clinic. He also serves on the boards of a number of charities such as the Association for the Recovery of Children and American Heroes.

Dr. Rivkin’s vision is to transform the way aesthetic medicine is practiced. He wants patients to have more non-invasive cosmetic options and spends a significant amount of time educating other physicians in the office, at seminars and in meetings around the world. Last year, he was a member of the teaching faculty at the Rhinoplasty meeting of the American Academy of Facial Plastic Surgery. He is a member of the physician advisory board for Contura and a prominent member of the national teaching faculties for Allergan, Contura, Johnson & Johnson, Medicis and Bioform.